My 182 was initially equipped with resistive fuel senders (Rochester) as they can be found on old Ford. Resistive fuel senders work pretty well, but they get old early. They stay in 100LL all the time, and the resistive circuit, in the end, loose precision. You end up with a non-perfect signal, which in my case, turns into signal lost (red crosses) on the G1000. Analog gauges work probably better with them, in order to filter out noisy informations, where the G1000 diagnosises loss of integrity. 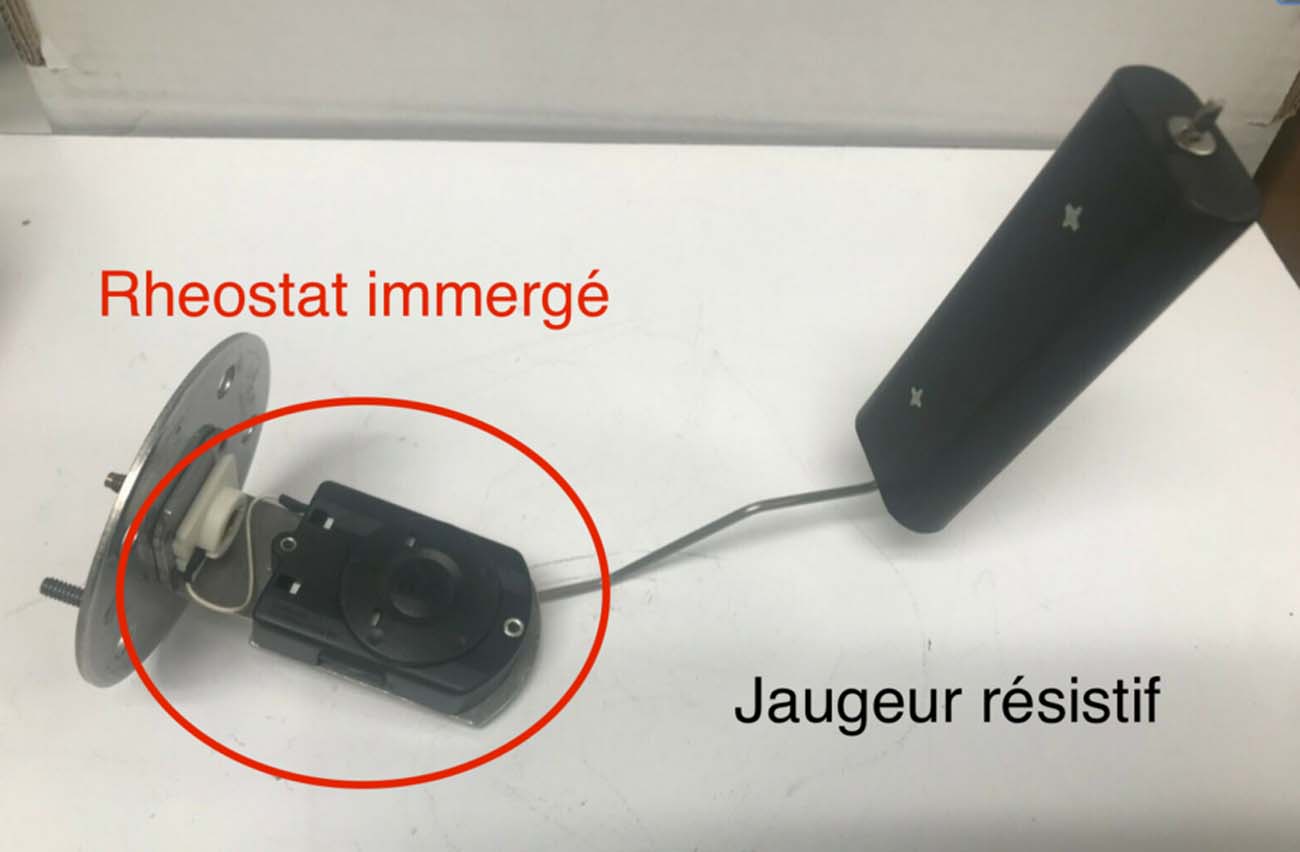 There is not much to do to improve. In a very complete ICA, Cessna suggests a few tricks to improve contacts.

I’ve also had a sender rebuilt by a specialist (Bill Malkassian), who claimed better longevity. It was not cheap (in the 300-400$) range, and didn’t last long before informations degraded (maybe 2 years). I also had a fuel sender replaced by a new one (it is today well north of $1000 from Cessna). It worked beautifully for a few years, before degrading again.

I noticed that the most sensitive area was with almost full fuel tanks : I would have two red crosses instead of gauges. While the tank empties, it would improve.

Later on, you could have red crosses any time, here and then. Even later, you would get aberrant informations, with for example, fast moving fuel level. With some experience, one could detect this (also with the help of the other gauge). 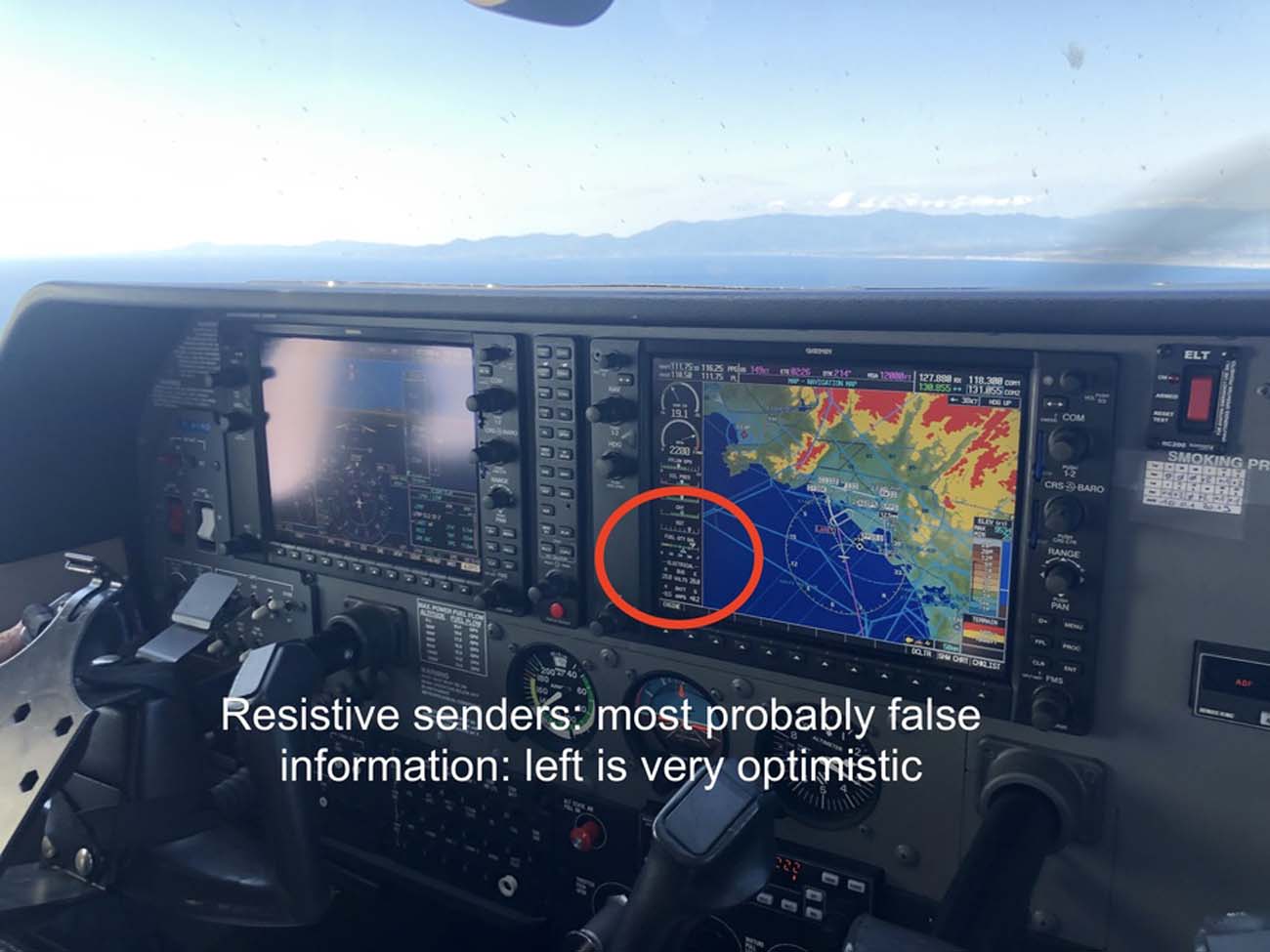 In the end, nothing terrible, but not neat. Renting pilots would complain about it, and they were right to. For information, Cessna installed capacitive senders with CAN bus from 2007. They are said to be much better, but I have heard of some problems with them, and replacement part cost is rocket high. 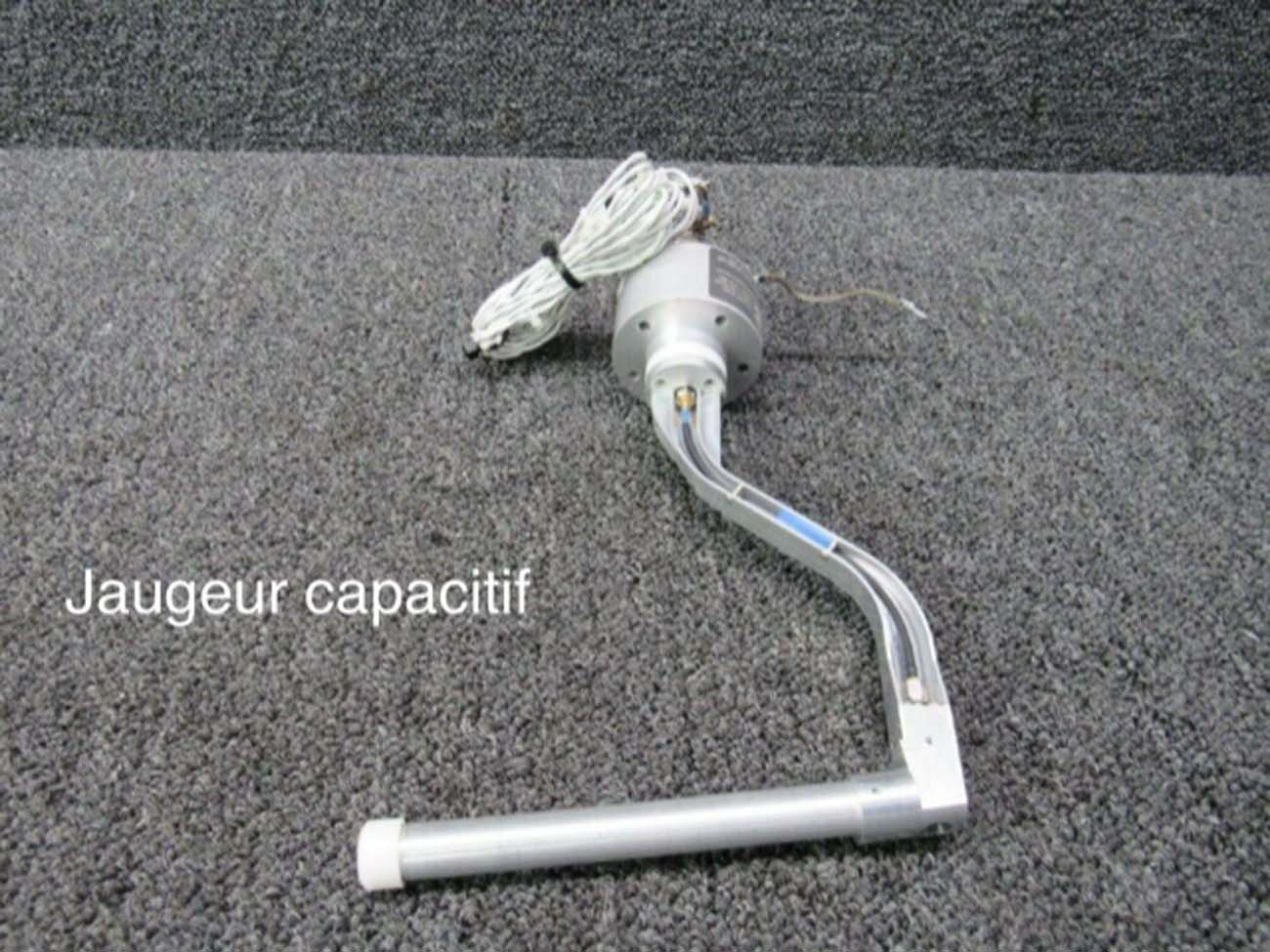 Here comes a new player: CIES Corp. They have developed a new technology of fuel sender. The main point is that there is no contact between the arm/float segment and the electronic unit. The arm position is determined magnetically,“without contact”, just as your magnetometer can detect your heading.

This brings two (big) advantages :
• There is no wear due to contact with AVGAS
• The risk of putting in contact AVGAS and electricity is cancelled

Second point, they have a same factor replacement unit for my Rochester senders, which can be factory configured to talk to the G1000.

Last, CIES has done a lot of work to provide AML STC. First in the FAA world, then EASA, which would make the paperwork straightforward on my F-reg aircraft.

I monitored their progress, and finally passed my order, as my resistive senders were getting tired. Both senders, configured for G1000 and with STC, came for around $1000. Slightly less than a single new Rochester from Cessna. 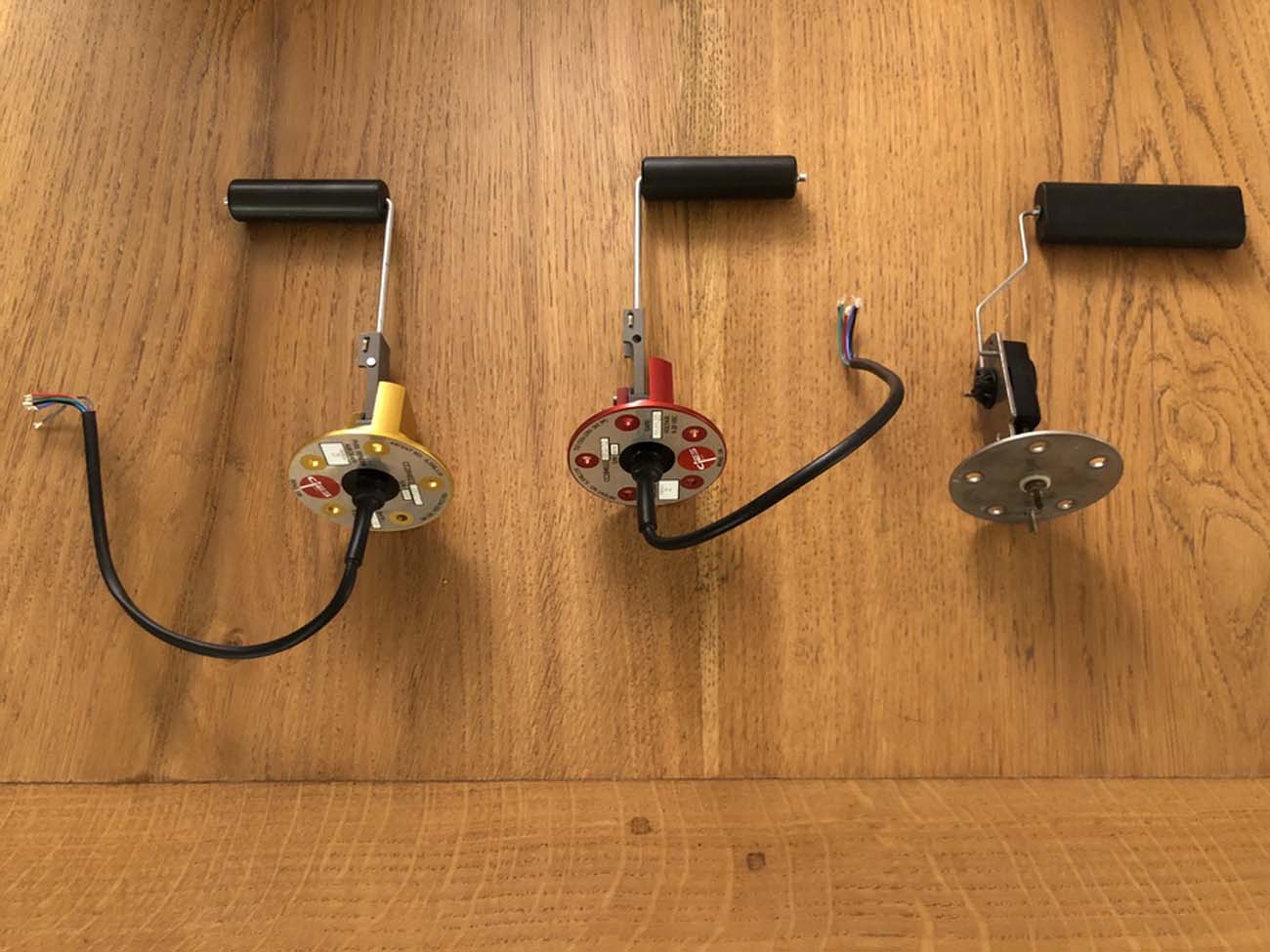 Installation was performed by my mechanics. The senders are exact replacement of the original ones, so no difficulties to place them in the tank’s hole. CIES Senders need current to work, and we had to wire them into the electric panel. The choice was made to put a breaker (1 AMP) in the X-FEED BUS, which means they are powered by the main battery. If I lose the main and switch to the stand-by battery, I would lose fuel level. No big deal. 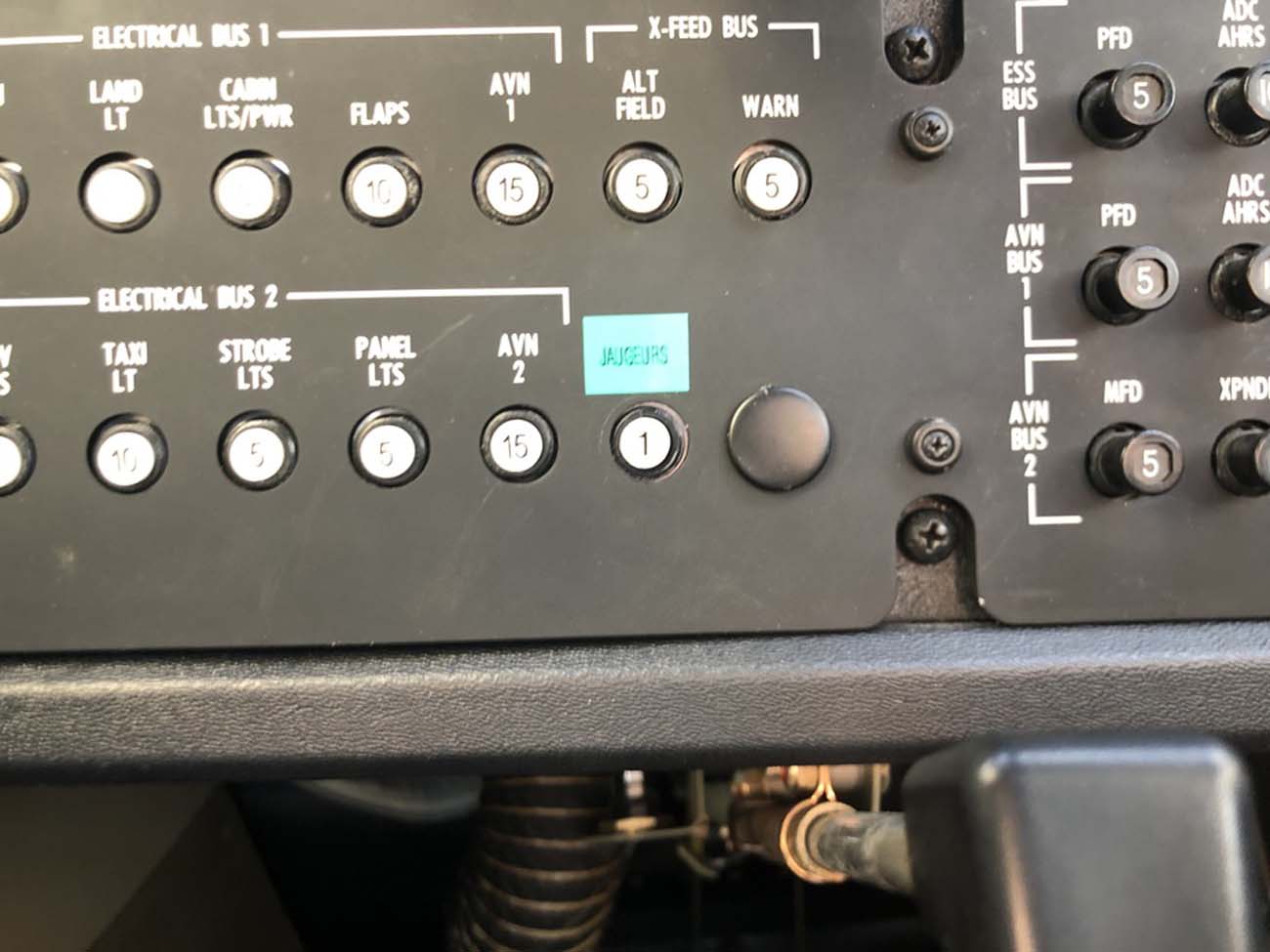 The trickiest part is the calibration, and I thought I would share this with you. In the case of older G1000, fuel senders are calibrated with a single point: the Zero Fuel level (empty tanks + unusable fuel which 2.5USG per side). Then, the G1000 uses a law (linear) to convert a raw value into a calibrated volume (“Calibrated Total” in USG). The law obviously depends on the initial calibration as you will see.

Cessna provides a procedure to perform the calibration. The most important point is that you must set the aircraft wings leveled, and attitude pitched up to 2 degrees. The last part was not considered when we did the first try, as the mechanics thought the aircraft had to be in level flight attitude (zero pitch). That seems to be a widespread belief, and it is wrong. Do it 2 degrees up!

So what did happen? When leveled to 0° pitch, the senders would measure a higher raw value. When you hit the calibrate button in those conditions, the law takes into account this higher value as an OFFSET. To compensate, it increases the slope factor. In real life, you end in the bottom part of your tank, with lower than real fuel level reading. Not dangerous, but a shame with such precise instruments. 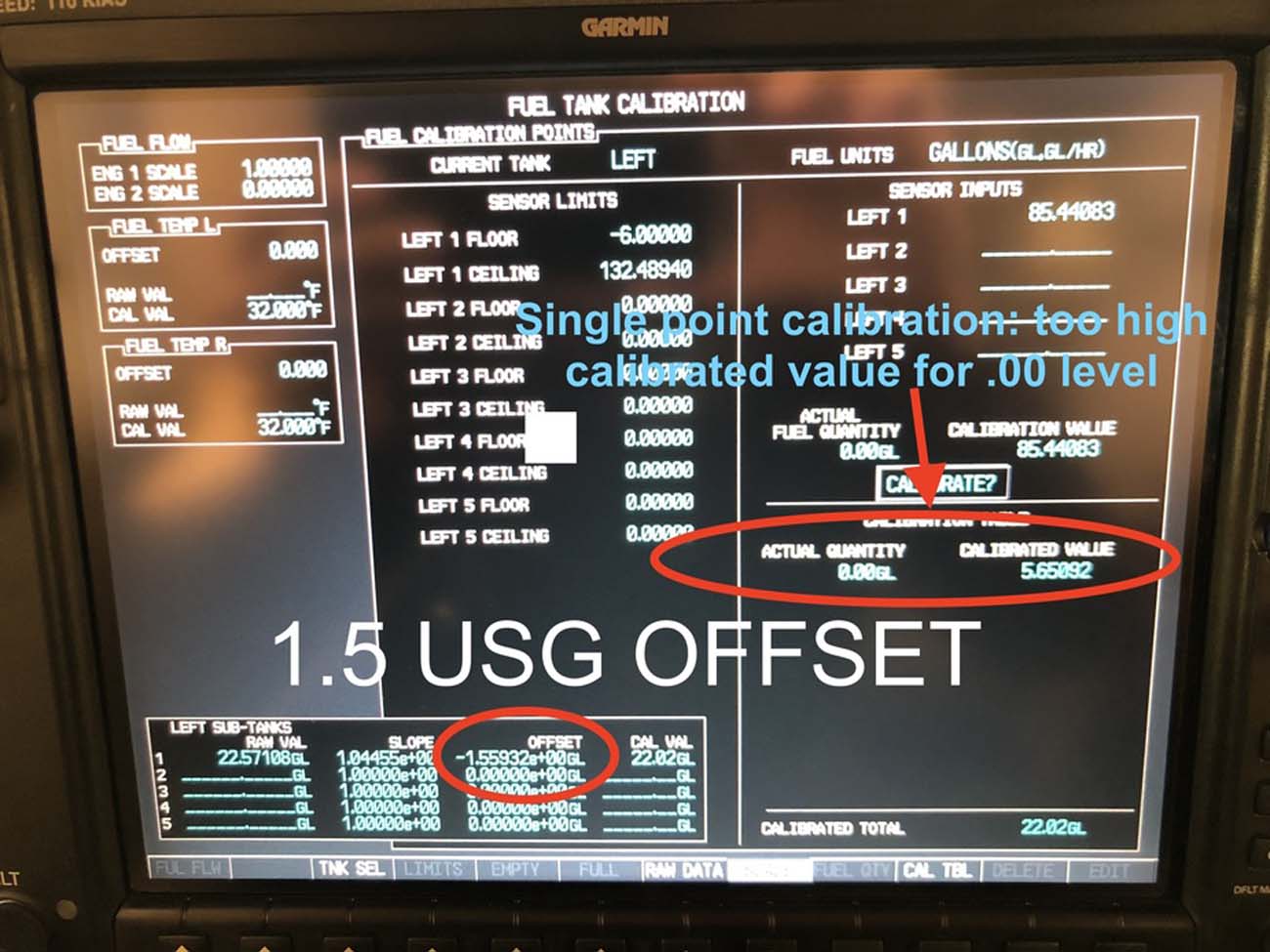 So I did it all again. I placed the aircraft wings leveled and pitch 2° up. When I hit the calibration button, my OFFSET was almost null. The slope was adjusted accordingly (it is calculated and fixed, I can’t do anything with it). The result significantly better. 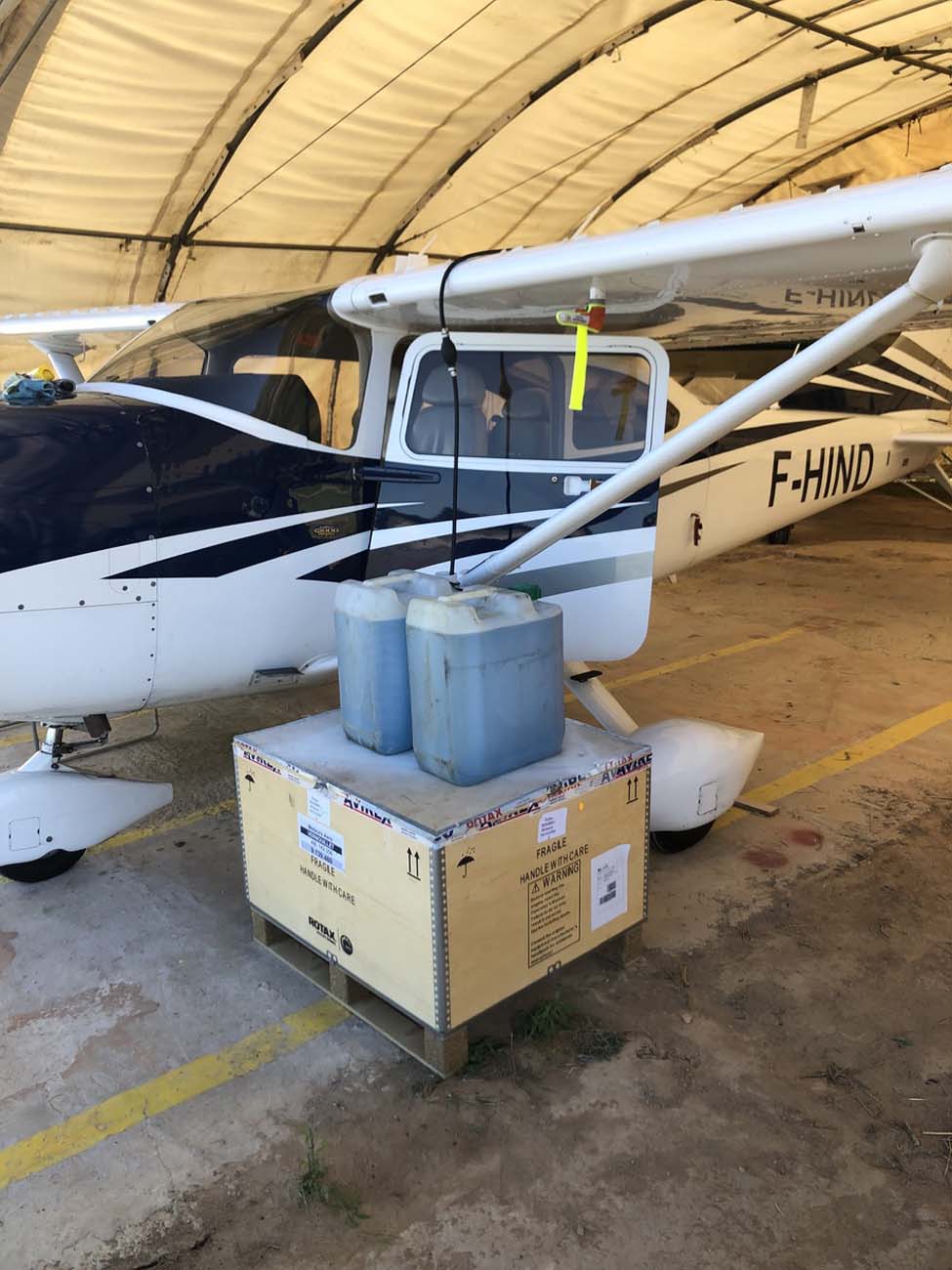 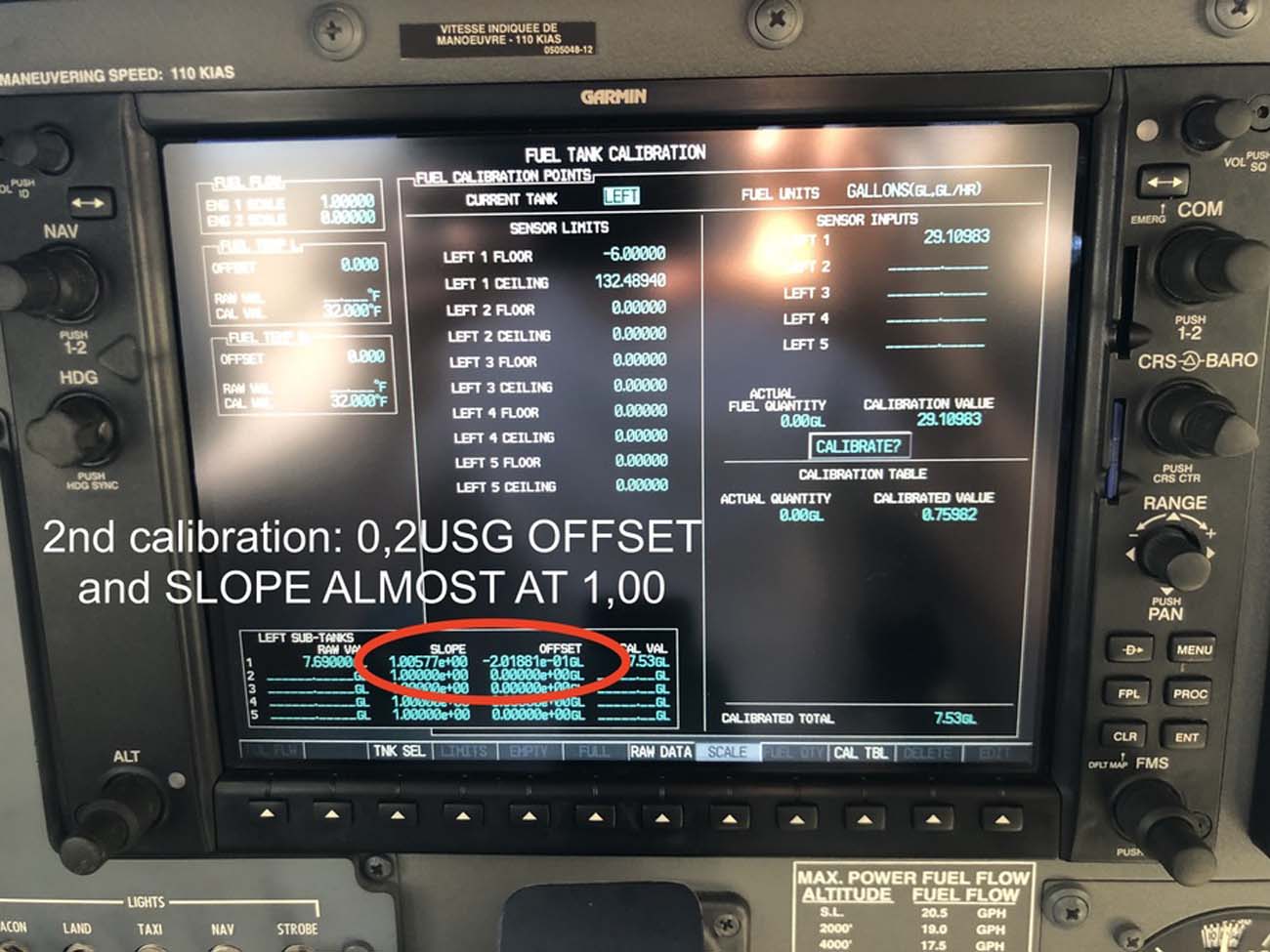 After few months of flying with them, I’m really pleased. The information is rock steady, I’ve never seen red crosses again. The precision (compared to FuelHawk manual fuel gauge – you know the transparent tube) is excellent. My impression is that fuel level is slighly underestimated above 30USG, and then matches reality. It may be related to the tank’s geometry. To be honest, I can’t remember what the previous senders did, as I didn’t consider them reliable enough to study them so precisely.

No regret on this one!